More snow and record cold on the way

Good Tuesday, everyone. The snow dome came tumbling down on Monday as a major winter storm pounded the bluegrass state with record snows for some. Much of the state picked up double digit snow totals with parts of the east seeing up to 18″.

This marked the first widespread double digit snowstorm since February 1998. Something about that line sounds familiar.

#WKYTRulesWinter for a reason. @kentuckyweather Winter Forecast (Nov. 20, 2014). Many thanks to him and all of @WKYT pic.twitter.com/YxPTimc9YP

I should probably just quit forecasting at this point and walk away on a high note. Don’t worry, I’m still here and will blow a forecast soon enough to make you forget all about that. 🙂

Ok, let’s get down to business because we have some serious weather rolling in. Temps this morning may actually start out below zero for some areas. Afternoon highs will reach the upper teens and low 20s as clouds roll back in. Those clouds are ahead of another strong arctic system that is likely to produce snow late tonight through Wednesday…

That’s ugly and will likely put down another 1″-4″ of snow across the state. Winds will be gusty and could hit 30-35mph at times with blowing and drifting snow a good possibility. Temps will stay in the low and mid teens for most of the day. Wow!

Speaking of wow… the computer model temps for Thursday into Friday are frightening. Check out the low temps from the GFS… 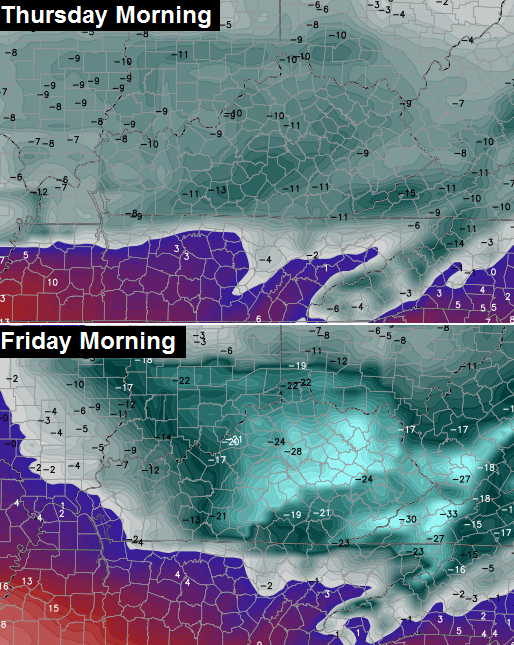 Not only would daily records be shattered, but monthly and all time records would be in jeopardy. For perspective… the coldest temperature ever recorded in Lexington is -21. The GFS has -28 as the Friday morning low.

The European Model also has temps getting into the -20 range during the exact same time.

You should take all necessary precautions to get ready for these brutally cold temps!

The weekend looks interesting as another storm system targets our region for winter weather. I’m just now beginning to really look at this setup and it has the look of snow and ice in our region. The European Model shows where the winter weather sets up through the weekend…

The Canadian is similar… 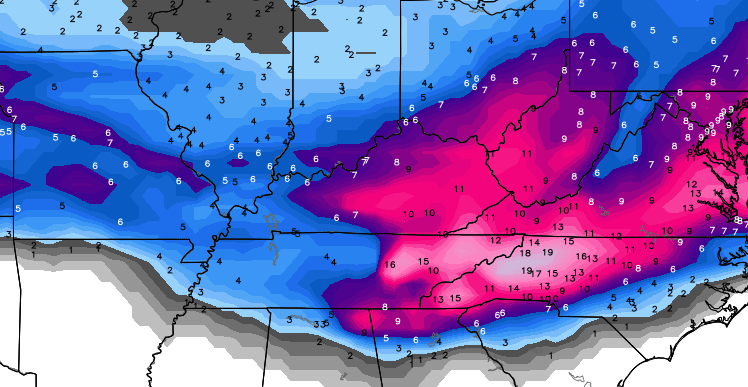 I don’t want to get too specific on this system until I can devote more time to studying it today.

For the fun of it, look what the European Model says follows this system into next week…

Last week I said we were likely heading into a memorable period of winter weather. I was wrong… this period will likely be remembered as historic.