Good Sunday, everyone. The North Pole is coming to Kentucky over the next couple of days and that spells trouble in the form of dangerously cold temperatures. The bitterly cold air will be ushered in by a late day blast of snow that gets followed up by arctic snow showers.

The day may start with a batch of light wintry precipitation breaking out across parts of central and northern Kentucky. Temps will then warm well above freezing and into the 40s during the afternoon hours. This will allow for a band of showers to develop and work eastward ahead of the arctic front.

That front works across the state as a wave of low pressure develops along it and lifts northward. I discounted this low impacting our weather with snow 3 days ago and continue to point toward a band of snow developing behind the arctic front. That shows up well on the Hi-Resolution RPM Model… 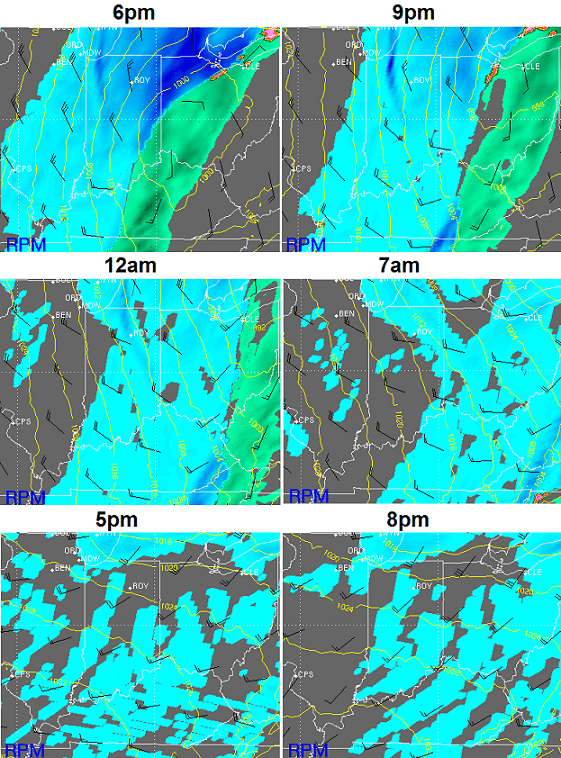 You can see the rapid change to snow with as temps drop 20 degrees in less than an hour after the front passes. Winds will gust up and snow showers and squalls will kick in behind the main snow band. There will be a big fluff factor with the flakes that fly after the first hour or so.

How much snow will fall where you live? I continue to blanket the entire state with 1″-4″ and that doesn’t even need a map. Will you be near the low end or the high end of the spread? That depends on just how wide the initial band of moderate to heavy snow is. That will require nowcasting.

Regardless of exactly how much snow you get… this isn’t a snowfall to plan on making a snowman or going sledding. The gusty winds will make sure of that as a lot of blowing snow will be noted of whatever falls.

Travel conditions will go downhill in a hurry this evening as the roads freeze up with the temperature drop and then we throw some snow on top of that.

I realize the snow is what everyone wants to talk about… but the cold has always been and continues to be THE story of the next few days. Readings will continue to drop all day Monday and will go below zero before the day is over. Those readings will continue into Tuesday morning and could hit -5 to -15 in many places. Record lows and record low high temps are both in jeopardy during this time.

Those types of numbers are wicked and dangerous, but things really become scary when we throw the wind into the mix. Wind chill numbers will make it feel from -20 to -30 degrees Monday and Tuesday. It’s absurd to see these types of numbers over such a long time frame.

I cannot stress enough how dangerous Monday and Tuesday will be. PLEASE take all necessary precautions to protect life and property!

I will have updates later. Take care.